Zorra invites foodbloggers around the globe to celebrate this year's Onion Day. I had never heard of the annual Zibelemärit in Berne (Switzerland) before but it sounds interesting.

There's a traditional Onion Market in Germany as well: It is called Zwiebelmarkt and takes place every second weekend in October. The market is held in Weimar, and it is said to be the only market fair that has continuously taken place since the Middle Ages and that is a typical regional folk festival.

For me, both Berne and Weimar are great places to visit - whether there is a Onion Market taking place or not. :-)

One of my favourite dishes containing onions is a Chinese dish called 洋葱牛肉 ("yáng cōng niúròu" in pinyin). This actually means onions and beef and you can get it in many restaurants in China, though I think it is a Northern Chinese dish as they used to have more beef in the North.

It is easy to prepare: Actually just cut onions and beef into small slices and stir-fry them. I like the combination of these two ingredients very much. 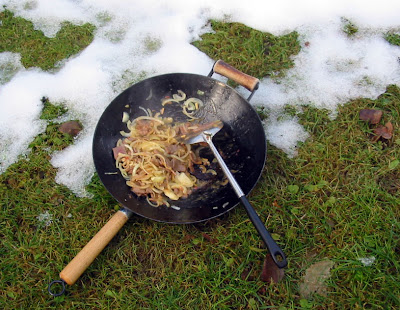 Cut beef across the grain into small slices. It works well when the beef is a bit frozen. Combine marinade ingredients and pour over meat, mix and let rest for half an hour.

Cut onions into small slices, peel ginger and chop into tiny pieces. Heat oil in a wok (or a large pan) and stir-fry onion, ginger and soy sauce for about one and a half minutes. Set aside.

At the end, pour a bit of Chinese sesame oil onto your dish and serve it. Best with plain rice and maybe a few more Chinese dishes. Enjoy your meal!

Such dishes seem to exist around the world: There is a Swabian "Zwiebelrostbraten" that has a similar flavour but of course the beef is not chopped but prepared as a whole piece of meat.